How is semen analysis​ conducted? 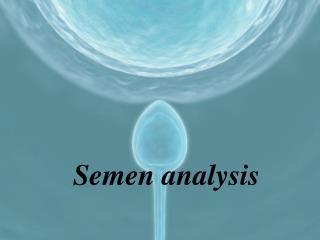 How is semen analysis conducted?

· sex with a condom

· sex with withdrawal before ejaculation

Getting a good sample

Two main factors are crucial to having a good testing sample. First, the semen must be kept at body temperature. If it gets too warm or too cold, the results will be inaccurate. Second, the semen must be delivered to the testing facility within 30 to 60 minutes of leaving the body.

Some factors can negatively affect the test, including:

· taking the test when you’re ill or stressed

· contamination of the sample

There are no known risks associated with a sperm analysis.

If semen analysis results aren’t within normal limits and handling of the specimen isn’t a factor, your doctor may also consider whether you’re taking the following substances, which can affect your sperm count:

· prescription drug use of medicines known to reduce sperm count, such as cimetidine

Testing your semen at home

Home semen tests are available. However, they only test for sperm count. They don’t analyze sperm motility or shape.

Results for at-home tests are usually available within 10 minutes. A normal sperm count (above 20 million sperm per milliliter of semen) from a home test doesn’t necessarily mean that a man is fertile, since it doesn’t consider all the possible causes of male infertility.

If you are concerned about your fertility, it’s best to get a lab test done by a medical professional. This will give you a more comprehensive evaluation of your fertility.

What are normal results?

After your semen sample is collected, your test results should be ready within 24 hours to one week, depending on the laboratory you go to. When a doctor reviews sperm analysis test results, there are many factors to consider. An analysis after vasectomy looks for the presence of sperm, but the analysis to look for fertility issues is much more in depth. Your doctor will take each of the following results into account:

A normal result for sperm shape is that more than 50 percent of sperm are normally shaped. If a man has greater than 50 percent of sperm that are abnormally shaped, this reduces his fertility. A laboratory may identify abnormalities in the sperm’s head, midsection, or tail. It’s also possible the sperm could be immature and therefore not able to effectively fertilize an egg.

For a normal result, more than 50 percent of sperm must move normally an hour after ejaculation. Sperm movement, or motility, is important to fertility because sperm must travel to fertilize an egg. An automated system analyzes the sperm for movement and rates them on a scale of 0 to 4. A score of 0 means the sperm are not moving, and a score of 3 or 4 represents good movement.

It should take 15 to 30 minutes before semen liquefies. While semen is initially thick, its ability to liquefy, or turn to a watery consistency, helps sperm to move. If semen does not liquefy in 15 to 30 minutes, fertility could be affected.

The sperm count in a normal semen analysis should be between 20 million to over 200 million. This result is also known as sperm density. If this number is low, conceiving can be more difficult.